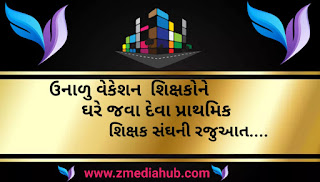 Telling Jai Bharat Saha Aap Shri that we are not excluded from the current virus epidemic which has spread all over the world. Due to such situation, educational work in schools is closed from March 15, 2020 as per the decision of the state government. But not all teachers are going to leave their headquarter they were circled. So the teachers are currently at the headquarter. Apart from this, the government has been engaged in the distribution of food grains to the school children and the villagers by the government and the government has also been working in coordination with the local administration as per the instructions of the government. You are the only one who knows about this matter.

Summer vacation in schools is going to start from next date 4th May 2020. Then the teacher brothers and sisters on duty in the primary schools of the state will have to go to their hometown i.e. home district from the beginning of vacation. The research has been submitted to the Gujarat State Primary Teachers Association, Shri Aap Saheb Shri, that such teachers should be allowed to go to their hometowns in their home district and not have to face any difficulty in doing so during people's time by the police and health department as well as other departments. A humble request to you sir.

We kindly request you to take appropriate action considering the above demand.